From the time that George King swam with his first Whale shark in 1969 until now, a lot remains to be learnt about the Whale shark (Rhincodon typus). The Ningaloo Coast provides the best opportunity in the world to encounter whale sharks, the world's largest fish, together with globally significant populations of iconic marine megafauna - manta rays, dugongs, marine turtles, humpbacks, other cetaceans, rays and sharks. It is for this reason that Kings Ningaloo Reef Tours are happy to contribute to the ongoing research into Whale sharks in any way that we can.

A percentage of every Whale shark tour fare that is sold contributes to whale shark conservation management and research. The Department of Biodiversity, Conservation and Attractions manage the funding received and its distribution. Your tour sales fund education and interpretation programs, research, monitoring and licencing and compliance.

Another way that Kings participate in Whale shark conservation is via a partnership with ECOCEAN. Ecocean is a globally recognised, non-government, not-for-profit organization based in Western Australia working towards scientific research, education and conservation of the marine environment. Established in 1995 by marine conservation biologist Brad Norman, with participants from 54 different countries, all contributing to furthering the research and knowledge of this threatened species. Brad and his researchers are regularly found onboard the Magellan and our company has assisted them in countless tagging operations.

what can we do?

Kings and the Whale sharks of Ningaloo Reef Thank You!

To learn more about Ecocean and Whale shark conservation you can visit: https://www.whaleshark.org.au/ 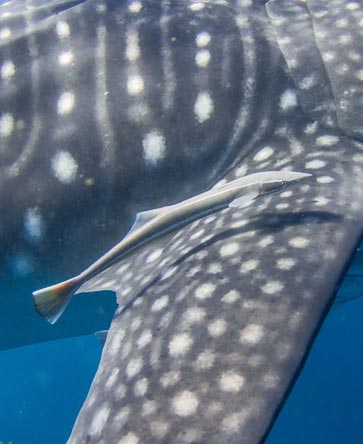